WELCOME TO THE WRITERS' CORNER

Armed with a ring 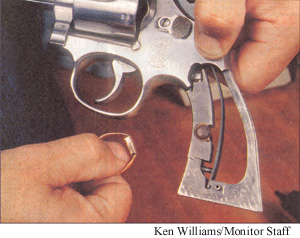 According to medieval myth the Tarnhelm was a magical helmet that enabled a warrior to change shape and become invisible.

Ricky Devoid's Tarnhelm Supply Co. in Boscawen can't make you invisible, but the magnetic ring it offers appears to be magic.

Devoid is the sole producer and distributor of an innovative safety device for revolvers that comes in the form of a magnetic ring.

For the last five years he has worked out of a cabin next to his home on High Street, taking orders from gun owners who want to keep unauthorized users from firing their pistols.

The "magna-trigger conversion" system has two parts. A magnetic lock is installed in the handle of the pistol and then the gun owner wears a special ring with an opposing magnet that releases the device and allows the gun to be deployed.

The philosophy behind the mechanism is described by a company advertisement: "Your special magnetic ring allows your instant firing of your gun, while your assailant (or your child finding your gun) will find it impossible to fire it!" 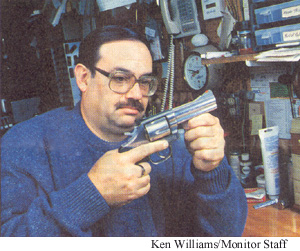 Devoid compares the magnetic device to automotive innovations like anti-lock brakes and air bags. He says there are some people that are opposed to the idea or don't want to spend the money for the extra precaution.

But Tarnhelm installs up to 30 devices a month. The company recently created a Web site - www.tarnhelm.com - that gets 1,000 hits a day, Devoid said.

Most of Devoid's customers are lawyers, doctors and other professionals concerned about personal defense, Devoid said.

"We are trying to make guns safer," he said. "For children who access them or people who are unauthorized to use them, they won't work."

Conversion to a magna-trigger costs $250 and $40 for each ring. For the fashion conscious, rings come in gold and silver. The magnet can even be set by a jeweler on a fancier signature ring.

Devoid has had an interest in firearms since childhood. He grew up in Concord on Little Pond Road and vividly remembers hunting deer before age 10. His interest led to instruction and police work. He has been trained by a long list of armorer's schools, and for the last decade has served as an instructor and patrolman for the Weare police department.

The gun manufacturer, Colt, has recently begun to develop its own "smart gun" technology. Devoid says, "I laugh when I hear that this is news because we've been doing it for years."

The magna-trigger device was invented more than 20 years ago by a man in California. When he died in the late 1980s, Devoid was authorized to continue selling the product.

Two years ago, when the Massachusetts legislature was considering a bill to require all firearm owners to buy guns with "smart gun" technology, the state's attorney general asked Devoid to testify. While it would have helped his business, Devoid recommended against the proposed law. He said it was because "any safety device, even one as the magna-trigger, can fail or be disengaged by the owner . . . and it does negate the fact that all guns should always be treated as being loaded and ready to fire."

Reprinted with Permission from the Concord Monitor, November 10, 1998

We have previous issues of Writers' Corner that are available, and we hope you will enjoy them also.

Writers' Corner | Mission Statement | What's New and Not So New