What people are saying about the Magna-Trigger:

"I have trusted my life and the lives of my family to this unique safety device for a number of years."
"Magna-trigger, The 'Magic Ring' Revolver Safety", Handguns Magazine, April, 1996

I used it as teaching gun to show students that they could shoot fast and straight with a wheelgun as well as an auto and that the Magna-trigger was a gun their children couldn't accidentally discharge. I am an unabashed fan of the Magna-trigger concept.

"Fluffy, The Pet Revolver", The Complete Book of Handguns, 1996 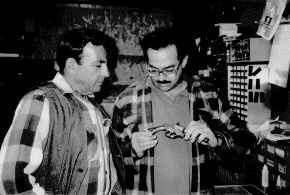 Some months ago, I made the difficult decision to obtain a handgun. I am a doctor in a town where there are, sadly, drug addicts who rob to pay for their habit. Since I have young children, I was extremely worried that an accident might occur, if the children ever got their hands on the weapon. Because the gun has to be readily accessible, I hunted for some mechanism that would disable the revolver for anyone, except the authorized owner. Eventually, I was given details about the Magna-Trigger and the distributor, Tarnhelm Supply Co, which is run by Mr. and Dr. Devoid.

Although I was a complete stranger, the Devoids offered me an extremely efficient and friendly response to my inquiry. Mr. & Mrs. Devoid spent a great deal of time sorting out the many problems associated with obtaining this handgun. (Importing a handgun from overseas, is a bureaucratic minefield). The gun works faultlessly and never fails to amaze people at my gun club. (They rarely are able to work out why the gun won't operate in their hands.)

I consider the Magna-Trigger to be one of the most substantial improvements in firearm safety since the revolver was conceived. Obviously, the Magna-Trigger is not for a fast draw enthusiast. This brilliant mechanism is purely for someone who is concerned with unauthorized firearm useage, yet wants to always rely on the gun working, when necessary.

Personally speaking, I feel that a mechanism such as the Magna Trigger ought to be mandatory. (I liken the Magna-Trigger to such innovations as the car safety belt, anti-lock brakes and the air-bag.) There are always going to be antagonists to safety devices. - (The same sort of people who would claim that safety belts prevent safe egress from a burning car, etc). - We must never allow ourselves to be put off by such absurdities. Safety belts DO save lives and to not wear them is a sign of gross irresponsibility. Similarly, the Magna-trigger WILL save lives and as responsible people we have an obligation to embrace such safety measures.

What the Magna-Trigger permits is for the revolver to work both as a self-defense weapon and as a threat. If the revolver is ever snatched from my hands, the assailant is not going to be able to shoot me with my own gun. No one could argue that this feature is anything other than priceless.

I would be happy to discuss the issue with any interested party.

Janis Cortese has done a review of the Magna-trigger on her web page. We won't quote it here but visit her page to see what she thought of the safety.

Writers' Corner | Mission Statement | What's New and Not So New